Whats up everyone. Its Yung Bizness back with another 2Real Savage Review. So I'm checking emails and I come across two tracks from TruDat SixHunnid; "Money Make The World Go Round" and "2 Long". I decided to review them.

First off TruDat SixHunnid reps South Carolina and by doing a lil investigation about him, it looks likes he takes his music shit seriously. Before actually seeing his picture I listened to the two tracks, I was picturing of an older look from him, I was actually fooled, but whatever. TruDat has a trap music sound and he pulls off the look. So the ears and the eyes match perfectly which is a plus because a lot for local and independent artist try to rap the streets and visually there is no match. So now lets dissect the tracks.

First, "Money Make The World Go Round". Now I have to critique this track based on not what I enjoy but by what it actually is... A Trap Track. I dunno know his sound gave me a little Gorilla Zoe feeling and the beat was actually straight. He pleasantly pulls of the genre and gets a passing grade for that. The chorus rang true and was kind of catchy. If this was school and Trap Music was the state exam he diffidently makes it to the next grade. On to "2 Long"

Ok "2 Long" tells the story of TruDat's experience of being on the block too long. It's a mellow track that just rides. There are really is no ups or downs, the Chorus and his bar feels like the same thing. Not bad, but I think its too together too close. But the most important thing, it does show TruDat's diversity.

Looking at the big picture, TruDat is straight but I feel that he is holding back something for some reason. I feel that he has the ability to set his game up tremendously and can be a force in this industry if he wants too.

The Final 2Real Savage verdict for both tracks is a 2 1/2 Savages out of 5. TruDat is definitely in the building and has the tools to get to the penthouse. You can listen to both tracks on www.2real4radio.com because 2Real is claiming TruDat SixHunnid, welcome home fam!

DONT BE SCARED! Send your music to 2real4radiosc@gmail.com for consideration to spun on our station. It MUST be in MP3 Format also send a short bio and picture.

Does Royale Diamond Shine or just a Diamond in the Rough?

Throwback Thursday's and Super Battle Sunday's is coming to 2real

Natalac Pimp The City Drops off "The Natalac Experience" to 2real

What The Fuck Am I listening to???

Does Royale Diamond Shine or just a Diamond in the Rough? 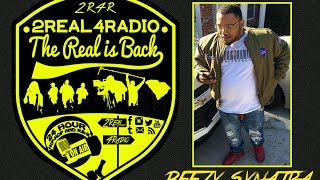